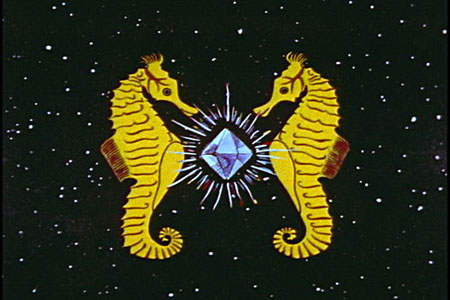 John Teton's animated short B'raesheet (Complete Version), released in 2010, is a new work built upon his award-winning 1973 film, based upon an ancient legend suggesting that people experience a fantastic vision of the universe prior to birth. It is set to music by Stravinsky, Charlie Haden and others.

Critics wrote of the shorter version "…a hauntingly lovely seven-minute impression of shapes and textures set to the music of Stravinsky's Firebird" (San Francisco Examiner), "…traces an embryo's evolution with joyous appreciation for life's mysteries" (Variety), and "Featured on Showtime, with its original humpback whale in the stars sequence more than twenty years before Fantasia 2000, this international award-winning film, set to Stravinsky's Firebird, is a mesmerizing experience" (Jerry Beck). At a little over eleven minutes, the new, complete film is one-half longer and includes some never-before released material that greatly amplifies the original vision with new imagery and additional music.

The original version of B'raesheet played at the Chicago and Los Angeles International Film Festivals, and took First Prize in Animation at the 12th Independent Filmmakers Festival and the President of the Japan Foundation Prize at the First Hiroshima International Amateur Film Festival—and as such, was the only American film to be awarded an Outstanding prize at the festival commemorating the 30th anniversary of the atomic bomb attack. B’raesheet was also received one of three finalist nominations nationwide for the first Student Academy Award for Animation.

Influence of B’raesheet on Other Films

In both the 1973 and 2010 versions, B’raesheet is an animated setting of a piece of romantic orchestral music composed by a student of Rimsky-Korsakov featuring a humpback whale diving in galactic starlight associated with a stellar explosion, and was screened at Cal Arts and internationally many times on Showtime and The Arts Channel decades before the release of Fantasia 2000, which included a segment matching that same description (and which used the same music from B’raesheet in another segment).

The metamorphosing white line-on-black drawings of human embryonic development and similar animal evolution sequence in this 1973 film were mimicked in a virtually identical sequence included without permission in the 1980 PBS series Cosmos. (The producers of Cosmos had a 16-mm film copy of B’raesheet for several months during the development of that series.) That sequence was one of few from the original Cosmos series later included the 2013 Fox Television remake Cosmos: A Spacetime Odyssey. Click here for a comparison of key artwork employed in B’raesheet and Cosmos.

Questions May Be Addressed to Earthlight Pictures